The road was white, and gray. Not smooth, but perhaps a fine stone powdered by the passage of many feet.

He reached the lip of stone and the road carried on. A voice stopped him.

“Please. I am caught. Please, will you help me?”

The Bandraoi was there, his white robe shining in the gray half-light. A thorny tendril had his foot and the robe caught at the base of the oak trees.

“I do not know if I am strong enough to go that way,” he said, pointing up where the white path lay.

“I will help you, then,” answered Bayeo, as if in a play.

And he took the White Druid’s hand and though he was light as a feather, light as a spirit which weighs something only if it is filled with regret, he helped him up to the edge of the oak wood and its leading fence of ivy where a great, gray-clad figure waited.

A red snake moved in the grass and watched them inquisitively from behind ivy leaves.

The figure turned its grey head toward bayeo and slowly lifted its head in order to be seen above the silver coin pendant and the samite armor.

To bayeo’s shock, he saw it was a Vulfen – grey and sleek and impossibly tall. He said, “Come no further,” in an irresistable tone.

The figure held his hand out for the Bandroi, who went to him, white against grey. The mists inside the wood seemed comforting and curled about the Bandraoi’s feet, although they did not touch the great Vulfen or his gnarled plain staff.

The Vulfen leaned close and said something to the bandraoi, who nodded and walked past him into the shadow of the oaks.

The Grey Vulfen turned back and surveyed Bayeo. Even when the Vulfen had been young and Caerdwyn had been practicing the Sight and the Inner Seeing, probing his thoughts, he never had felt so … beheld. So … seen.

“We shall meet again. Three times,” the Grey walker pronounced.

“Now, you should go back. Before it is too late,” and he gestured back down the pale road which had become more powdery and had begun to blend into the shale and featureless stone.

When Bayeo looked back, the Grey Vulfen was deep within the woods, leading the Bandraoi, who, in the halflight seemed less light a man and more like a flame or a flickering will-o-the-wisp or some infinite and inexhaustible light that was finally, finally free.

While he was not looking, the red snake came onto the White Road and coiled near and about his foot. Jumping back, Bayeo went for his weapon, but such was the calm in the creatures stance and face that the Vulfen paused and held out an arm. Like a bracer, like something half-remembered, the red snake wrapped itself up his arm, placing its head on his shoulder, like a watchful epaulet.

He turned and walked back down the white road, which no one ever does, and brought color with him from the great green forest where the road ends.

Grey and black seem to predominate. Flecks and runs and whorls.
But they are not alone. Blue is here, and something flashing and colorless.
Hazel, too, and rust and subtle greens like seaweed long under the sea.
White curve, up and down like a stone rolling back and forth. A strange tide, so solid and capped in grey like the stones.
No, it has a thorn, tawny and pale.
Sandpiper. Running up and down, searching for something.
No.
You have been searching for something.
What was it?
Yes, it was a question you’ve been hunting.
What? No….
Where? No….
Who? Yes, that’s it. Who am I?
Perhaps the Sandpiper, the thing known may itself know, which is why it has come!

Movement is a strange mobile of lurching automation. Legs and feet, cold and heavy. The top of a rise, and like a star falling back to heaven the bird is a white shot. The bird is gone.

The sea murmurs and nuzzles at the shore, fussing around stones. 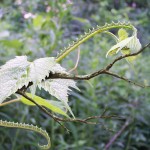 Listen.
With the night falling, we are saying thank you.
We are stopping at the bridges and bowing to the railings
We are running out of the green forest rooms
with food in our mouths to look up at the sky
saying thank you thank you

The needles of the crowded pines make a smell he has no name for.
He.
Colors were simple, themselves. Smells are something else, references to objects he does not have the names for. Sweet. Positive.
The small gossamer insects, their wide, complex wings veined with sunset gold rise like gratitude from the ferns around him, long ruddy legs dangling like streamers. They seem to be lifting something out of his way, or rising, like a parade of thanks. 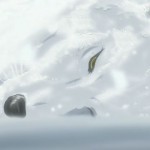 Before him was a bed of dry pine needles over a rich sphagnum moss whose infinitely turned spongy leaves had soaked all the wetness from the rock-sheltered pines. Squirrels seemed to have misplaced – or left as a gift – walnuts in a place that sometimes was a bucket, and the long soaking had rendered the nuts edible and tasty.
This land would always be kind to him, he knew, this promontory. Perhaps, in a way, the whole world, but not like this.
It was because of thinking kindness that he was sharing in their prayer, which was not, as he thought at first, directed at him.

The paen is rising from the stone and
spamming up from the black sea crashing and whirling
on high cliffs
from the swift-winged birds who have stopped their darting
just for that moment
from the high and low stars
from the woods and their spirits and creatures
from the inhumans across the sea and the many winds
and places, the call rises, repeated once more.

And this is how it was:
He hungered, and then he ate.
He was tired, and then he slept.
He woke and wondered,
and the wind spoke in low tones.
This went on for some time.