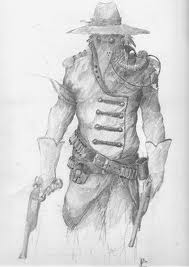 Recruited in the strangely dismal cafe courtyard of Booda, an unlikely group sets out after the irrepressible (and liver-spotted) Jack Rustpass, “Rusty Jack”. Bearing more supplies than any sane person would attempt, but with a spring in his step and cunning gel in his remarkable died comb-over, Rusty Jack led the intrepid group around the Inifinite Sink on the slender arching main bridge from Booda, past the golf course with its sprinklers Chuck-Chuck-chuckling away to themselves and up into the cracked edges of the world toward Nest.

Finding a sheltered cave for the night with a wealth of glorious months and abundant water, they eased into their journey, perhaps thinking, “Oh, my this isn’t so bad,” although certainly at least the jaded Nano with the staff seeming made of bound Iron Wind though. “THis isn’t so bad. Oh, my.”

They moved up through the tall tall trees with their spongy tops sproinging in the morning wind. It couldn’t have taken long for the to lose Rusty to scouting ahead (his pack going strangely silent among the ferns). The raven-men found them. Or they lured the raven-men in or… well.

There was blood. In all the 9 worlds, there is always blood.

Afterward, they found the ring, oh and Rusty in the midst of the fight (when Meer helped him find Unconsciousness). There were signs that the ravens came there often, though this was not their traditional home, which was usually higher in the mountains. The head raven, among his Shen had something that turned out to be the Ring’s key.

Rusty told them to stay put, not mess about, and he would be right back. That went as such things usually go.

The key activated something in the Ring, or activated a thing that was already there and the Ring let them in, or transported them to another planet, or well, who could say?

They were in a stale-aired, silent space shaped like an egg. The Ring was there, too. It didn’t seem to mind.

They futzed about, as you do with Oddities and Cyphers. Through Gram’s Solar Reconnaissance Filters, they established a voice connection with the Ring, which told them its name was “Zero Dimensional Shelter” and a number. Or perhaps its name was the number. It told them it was hurt. The repair that it use the ball of light at its center to regenerate itself resulted in some slashing beams of light that proved not too fun to be touched by. It didn’t work, anyway.

Eventually, they found a way out, or the Ring or the Light or the number Zero got tired of them and exited them. The air had a whole new tang to it, and the light felt strange slanting through the trees after the pure and disturbing light of the Shelter. Bel pocketed the key, and called for Rusty.

A while later, back at the site of their fight, they found the Murdens’ bodies gone, and a sign from Rusty tacked to a tree saying, “Done went and gone.”

Helpful, as ever, those older Jacks.