There are, as all know, three Clans of the Gods.  These are the Night Lodge, the Sky House, and Those Who Stand Apart.

The title for a priest is “Siar” (SHAR), meaning speaker.

The Night Lodge are old gods who came to Mawr with the Brothers and the first Kingdoms. Those Who Stand Apart may have come with the Kings, but may have already been here among the races of Mawr. 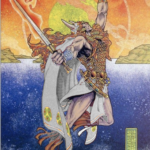 Bel is Honor, Glory in Combat, and Victory. His color is White. Often called the “Fair Slayer”, also a title for heroes who dignify themselves through combat. Bel’s white standard is raised before any battle and the parties negotiate their war honorably. White flags and white outfits are common in training areas. All those who work with their hands on the gear of battle or face battle themselves pay homage to Bel, and wear some white in his honor.

Macháin “mu-HAHN” is mistress of the Fílidh (bards) and all poets and singers and artists. It is she who invented Language and gave speech to the races of the world. Any servant of hers who learns to read the trapped souls of the written word is immediately forsaken by her. Her colors are red and violet, and tartan. She is sometimes called “The Singer”, or “Old Woman History” or Siar na Siaraí, “Speaker of Speakers”.

Dána “DAWN-uh” is the Luck whom all alternately curse or praise. Her color is silver. She’s called the Gambler, and the Doxie. It is said that the one who can marry Dána will gain the great secret treasures of Mawr, and that the one who gives the goddess luck will be fortunate all the rest of his days. Dána is said to visit the foremaths of tragedy, adorned with a silver circlet; she is said to attend the funerals of the unfortunate wearing silver earrings and a silver torc. It is said that to be kind to a woman wearing silver on the road will bring Dána’s eye to your own misfortunes.

Ursean “ur-SEAN” is a wanderer of all Roads and Ways. His color is brown, and his symbol is the open door, and is used often for public houses along the paths of Mawr.

He is called the Doorkeeper, or the Stumbler. Ursean guides those on the gods’ work toward the Ribbon, and causes the ways of Mawr to reject others unfit for the gods’ benefice: the kind of person who could get lost on a clear day in his home town. Ursean loves mead, and it is said to be fortunate for travelers to buy mead for dirt-stained persons on the road.

The lover pair of Druys, Goddess of Fertility and Ventain, God of the Hunt keep sacred the natural sites of Mawr, and are, it’s said, the source of all mortal urgings. Their color is green and horn. Sacrifices of horn and evergreen bough are burned to them by all who walk in the wilderness or seek to take of the Lovers’ many get. They can take any shape or form, and often draw travelers into trouble with the Bright Ones in lonely places.

The powers of the Sky House are fundamentally different than the Night Lodge – newer, nearer, both more and less human. Some say they came to Mawr from the South, some say they trailed after the 5 Kings who came, and allied with them after their arrival in Mawr.

Chief among the sky House is Gaudr, Lord of the Lighted Vault of Heaven.

He is pictured as a paternal warrior astride a great white horse, bearing a sword, with a brilliant light behind and all around him.

His wife is Gaer, Mistress of Clear Day and Gentle Rain.

Pictured surrounded by rainbow, and perhaps standing on a cloud, her colors are the rainbow, and the soft blue of a gentle day.

There are also fierce Solas, the personification of Light. He is often pictured with the sun on the horns of his helmet.

He is pictured with a sword whose hilt is gleaming Godsblood, and bracers lined with blue seametal. Solas walks into battle without shield, but uses water and air themselves to protect him, the sun shining always on his back as he fights.

His wife Baetha, Mistress of growing things. Their purview is the day and the quiet, natural world.

There is a rivalry between Gaer and Baetha for the praise of those who work the land. Gaer provides the weather and the rain that make plants flourish; but Baetha is the germination of the seed, the split of flower and sprout. Their husbands do not help this dispute by their long tradition never to meet face to face. The Vaulted Heavens and Light Itself it is said cannot be personified together, and should that happen, some great change that the Nightwings both long for and fear will come to pass.

Those Who Stand Apart

These gods take no part in the affairs of dark and light, but wander the invisible strands of the world, tending to their own interests and needs.

Ddurn is lord of the Grey World where spirits walk, keeper of the boundaries of the Bright World where the Beautiful Ones come from, and steward of the dead.

He’s called the Grey Wanderer, the Bedsetter, the Uninvited Guest.

One aspect of Ddurn is The Stranger on the Road – a man or woman wreathed in white or pale gray robes. It is always best to invite the Stranger to walk with you – even if they do not speak. It is said that kind company may give the Stranger something They need, and they will allow you to keep walking your own road, instead of the final one into the Grey Lands….

His color is grey, and he is said to be the only true friend of all that live.

Mabinown – the Free God, who changes all he touches. Mabinown is called the Facemaker, the Masked King. When things among the people of the Five Kingdoms become stale, when life loses its sheen, when sorrow – or joy – are too great, Mabinown walks the earth, sowing the seeds of change great and small. Those interested in revolution invite Mabinown with painted masks and colorful displays of feathers. Those trying to stave off change try to appease Mabinown by burning beautiful things and creating transitory moments of beauty.

was the hope of Reunion of light and dark, but died in the coming of her twins:

Ternir is the spinner of prophecy, told in the grey light of Pronnabyn’s Dusk; he does not himself understand the future, but instead is made up of it so that even as he intends simple things, he creates for others visions of what will or may come to pass. Terror was locked in a prison under the earth, it is said, by the greatest of the Sorceror Kings for his interference in the plans of the Five Peoples. It is said that in this process, Ternir spoke – one of the few known times – with intent and malice against the King; and so the prophecies bound the King, but gave him strange powers of the future itself which it is said have yet to unfurl themselves in the light of Gaudr’s days. His color is the gold of fine thread, the sun’s shimmer on water. He’s called the Spinner, the Mute, the Prisoner.

Ciánan is the Seer, who knows every secret. It was he who trapped the language of Macháin in writing, binding wisdom for the future. Machain took one of his eyes for this offense, and has enjoined her fillidh from having anything to do with his arts. After this, it is he who bestowed the Eye upon the People, the awareness of the how Arcodd exists, how her power moves and flows, and is therefore responsible for the birth of the Magic Arts. Ciánan is especially praised in Cahál, which takes its name from him. His color is the green and gold of the eyes of the Kings, and his symbol is an eye or a blinded eye. He’s called the Seer, the Rebel, the Blinded Eye.

2 Responses to The Gods