End of the Maelstrom

My eyes started to glaze. At least the ones in my head, with the very possible inclusion of all the ones inked under the skin that Shon’Ai was so intimately draped over.

These priests have all the time in the world to talk, I think, staring at the eye-muddled wall. Ah, something else covered with eyes that doesn’t necessarily see.

“A TRIAL RUN, at least!” the old priest bellowed. Caution was fine for him, I glowered to myself, the creeping synth didn’t seem to be dependent on time, but on further injury. My particular creeping flesh was time sensitive, however. As usual, the thought of the Nagaina’s offspring brought a twinge along the base of my skull. Somatic? I’ll never know, so just shove it out of my mind. Like I’m going to shove this grenade into the A Nem O Knee.

I heard that one of the previous Worlds thought that people had spirit guides, animals that were and weren’t real that would help them weave the True Path through a world of deception. They were holy icons, a mix of Truth and Comfortable Lie. Instead, I have a piece of synth in my brain to connect me to the Truth directly, but in those days, perhaps my guide would have been a potato. It certainly would herald the level of competence I have shown since I left my family and my simple life as a tumbler. This simple failure to swim set off the tumescent (ugh) tentacled beast, another eye to add to my growing collection. Good thing Berius isn’t here to see.

The thought fills me with seething, raw anger. The strange new sight gifted – well, loaned – to me by Shon’Ai, is tinged with red, shrinking into a familiar tunnelled outlook. In the water, under all this pressure, I hear the blood thrumming in my ears, drowning out the arguing priests. Ah, a second attempt, finally. 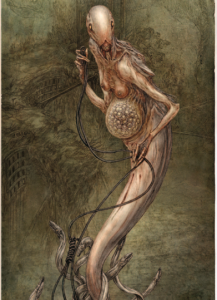 As Hasver banishes the eye from the wall, a new grotesquery greets us. There is a strange spindly creature, belly bowed outward with a thousand glittering lights (ah, but for the grace of chance, eh?). The priests want to talk. Shambo sees her for what she is, I think, or, at least, I trust him. I wonder, briefly, if this is some feedback loop, between lensing through the red men and linking with Shon’Ai, but that thought quickly sinks, curiosity being less important than danger assessment.

She knows how to hit the priests’ buttons, though. They lock onto the word “Arbitration” like it means she wants to parley. Don’t they know it means we’re about to be judged? Ah, they’ve caught on. Time to send Roz into danger again. I am strangely okay with this. With the Godspeck, violence has gotten easier. I remember being less excited by action, but those thoughts grow fuzz-

I am through the door before I even think about it, the Speck already tightening my world to just the singing blood and taut sinews. I think the men keep talking, but words are useless here, this is the time for animal things. I feel a sick burning at the base of my skull, and I know that the Godspeck is coming online. We are becoming one, and it is my center.

The bass beat of my heart in my ears is cut by a shriek; surely this hideous brood mother isn’t trying to sing? This place, this time, and its horrible songs, I think bitterly, hunkering further down into the base rhythms of my body. Shon’Ai’s fins grow longer, and I feel the fluid speed in my muscles, and a flash of inspiration. Surely the Speck’s work. I bunch up against the wall, flipper-paw-HAND reaching for my strange belt buckle. Bubbles, a flash, and I am off, speeding towards the mother-beast.

Crash, flash, meaty thump the nearby whir of her chain made all of little mechanical eel mouths. I think Boom and release the grenade. They yank through the wall, and I am yanked.

The ghastly mother swirls around herself, gathering her bearings and her chain and her dreadful poison-sweet song that the Gospeck counters with a short lecture on the different ways to butcher a hind with a long knife. I swim. Safety-yellow mosquitoes dance out of the grenade, their eyes turning from O to X. They make a sad sound.

After that, things got strange….

There sometimes comes a moment where exhaustion gives way to release and serenity… where the clenched grasp on what is pressing and present gives way to timeless detachment. As the exotelligence made its way through the opening it created, Hasver allowed himself to slip gently out of consciousness. He saw himself surrounded by a blue light, strangely warm and inviting… familiar… troublingly so… and then it pierced his heart.

“HaaaaaaaaasVER.” The first syllable sounded hissed, like the air pushed along in front of a distant, oncoming train. The second syllable, however, was like the train itself, colliding into him without slowing or stopping.

He was in that cavern again. The details of its walls eluded him, like the written word in a dream. But in front of him, clear as day, was the staff, dull and dark, but still beckoning to him with an invisible light.

Somewhere, imprisoned at the back of his thoughts, he screamed in an attempt to change the past. He mentally jolted with a sudden alien knowledge:

One could change the past. But one could not change fate. The staff flickered, as if to nod.

He could only watch as his hand, his, if not the wrinkled, gnarled one he had come to know, reached forward and grabbed it.

There was the blue light again. It blinded even as it consumed. He experienced being swallowed, digested, and transformed into something new, something terrible, something different.

A different blue light, but only the sky: “Hasver! Just relax! It’ll dissipate on its own.” And the synth adaptation around him finally gave way. He sucked in a breath of air, and saw the nearby lobster crewman’s eyes go from green to blue and back again.

He lost his hold on waking.

The Shambo that Binds

My mind has reached its current limits. My body has begun to devour itself. I can feel my third eye, the port that connects my awareness with the field of information that permeates, this, our Ninth World, stretched beyond its physical capacity, and then some. The link between myself, The Redmen, Shon’ai and my companions has shoved itself into my forehead like a fist, pumping in and out with every effort; a violent vulgarity.

So close. The exointelligence, the gharillan, our task complete and not a moment to soon. I feel the blood running down my face, I feel my muscles screaming in pain, as if I’ve been trodden upon by one of The Dread Destroyers of legend. I feel relief as the storm abates, ecstasy as the blessed exointelligence returns to the stars. I feel a dark foreboding presence that warns me of a final, terrible judgment that will fall over The Steadfast, and the lands beyond, and I know that our work is far from over.