For some of them, the echo began, “… for I am the White Monarch, half the rulership of the Underworld.” For others it started, “…but there was too much of her, and that excess could not be contained, and of course, it took form, and you, Oakskin.” And it stopped mattering what order he had said them in, or even the words he had said, because that is how memory works. We take the world into us. Experience is the food of the body, and memory may be its excrement.

They ate, and drank to soothe their wounds. They said goodbye to Wilder Cane, with her offers to greet them whether she be in this little seaside town, or back at home with her grandchildren, or wherever, they would be welcome. She showed them a wandering path leading down to the sea, and they went, to have the salt lick and seal their wounds and anneal their hearts for a time… before the waves became too unkind to be withstood, and even Chain dragged himself out of the heaving surf.

Scent of Snow provided succor for Onyx, who went to her separately. Then Scent of Snow provided assistance to a generous Sanction, who watched her use spices and scent to bolster the innate strength of the body and the spirit as he labored to encourage bone and blood and skin to remember their wholeness. The two of them together did not entirely succeed. Over the long days of recovery that followed (even the Exalted are slow to recover from such terrible injuries as were dealt them by the Gossamer). 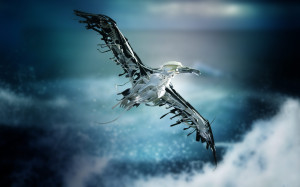 Toward the the end of their Recovery, Brink brought them news that they were being spied upon by a strange bird. Through White Feather’s keen vision, he spied that the creature was made to give the far-off silhouette of a seagull but up close it was a constructed thing, made of artifice and Essence. He ended up downing one of the creatures, and bringing its fallen automaton body to Sanction, who found some kind of maker’s mark that he would later reveal to be the Old Realm sigil of the Yozi Autochthon.

The next day, a larger seabird returned to survey the caravan, more pelican in nature and size, with greater speed that seemed to have grown wise to the movements of White Feather and stayed always out of attack range. Eventually, they were given a message, “Tomorrow’s tomorrow, when the Unconquered Burns, at the crossroads.”

They consulted the Night Driver, and after a small meditation, he suggested that they could take this meeting, but they would experience a loss in doing so. He suggested they could also proceed to the nearby port town to seek answers.