In the morning, they feasted on the bounty of the plains and discussed their options. Dian felt that they would know no hardship crossing the spring bounty of open Cahál toward the Maevan Swamp. Given the party’s reluctance to get involved in politics, Dian suggested a route that took them through the plains of the south and around along the Afon Van that runs up into the fens from the south.

Agreeing, they followed Dian across the plains at an easy fast pace, using hard-packed highlands to bypass the wetter, marshy areas of the plains and avoid the small towns and villages dotting the rich farmlands of central Cahál. After three days travel, they came to a stony region of exposed granite and sandstone through which the beautiful clear river Van runs on rocky beds.

They encountered a free village of…Saren, which Dian had obviously had dealings with in the past. Their leader was a large, greenish Saren named Derrenton, and they were also met by a large Saren who must have been one of the village guards or hunters that they knew only as “chain” for the long, heavy chain he wore around his waist and seemed to menace them with. Filled with their characteristic seriousness tempered with surprising self-humor, the Saren welcomed them, and proudly announced their self-governance, independence from Cahál and their bizarre practice of *voting* for their leaders, communally. They called themselves “the People”, which they – like everything else – had evidently voted on. 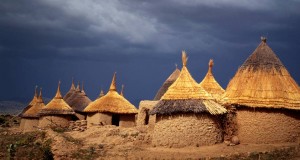 They shared that their seemed to be movement in the human settlements to their north, but they had not experienced any break in their remote peace. They offered the three men one of their dugout boats, lined with a concrete-like stone. They gave the travellers a few supplies, and told them that the river ahead might be a bit wild, but that the Maevan Fens had become a great lake with all the rain, and so their passage might be easier, if a bit less guided.

1 Response to Meet the People