Missives of the Atom

Alien duplo blocks laid out like a child’s experiment creating enough clean fusion power to split the night with a focused plasma torch and power four (now one) Archangels soaring the clean airs of the northern Steadfast.

The Gaian wave of the Tithe that broke a million-year-old safety-design project could not destroy it. A Nano of the truth wrapping himself in crystalline protection; heavy metals synthesized from the air and the stores of the body and the structure around him. He slow-walks an instructive hall of Numenera ikons of a history of the worship and transformation by radiation.

Already the leaking reactor filled the outer hall with enough radiation to kill the unprotected. There was a safe room up ahead, behind an illustration of a god of ‘light’. Into His white burn went Takir, the evolving man: already changed and changing like a story of their religion.

In the rooms below, the Priest of the White Fort, Zane, navigated the byways of his clever guests. 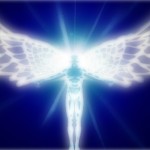 They spoke of the last days of Archangels, of not entering sleep alone again, of their enemy the Diamond Fist of the Gaians, now called The Man Maker for his ability to turn the soldiers of the Truth against their own, his ability to make Men of what the truth sent him. None of them wondered what the Archangels were before the Truth found them.

Zane commented how the travellers were dressed, like outcasts, or pagans….

The power went out. The power came back on.

Synthetics came to help Roz, but the help was not needed. The baby waited inside a metal man to be unborn. The Lady of Salt could not think her way past radiation and floating crystals. She itched for a game board lost to impossible tides. She thought of MahJong. She watched the Priests play games with one another in words – but this was not her game, and taught her nothing.

Impossible crystal structures crumbling to ash; covered in the dust of glory like a king of moths, Takir emerged. The reactor was reconfigured. The life of the Torch was extended probably longer than the structures of the building had left. Takir had the good graces to look abashed when he explained that his ‘going to take a look’ had become ‘reconfiguring lethal radioactive alien machines… for good?’

The little caterpillar Thread gave them back what they gave, the Changer, the Synthman, and the Mother of Machines.

Out they went to the creche of Gabriel. Zane called it The Gabriel. No one noticed that everyone else called her Gabriel.