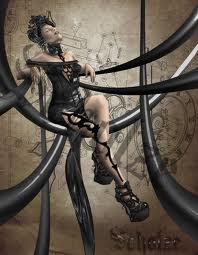 Marshaling themselves and fighting off one of the Blue Lady’s bishops, the group fled the fallen Web Bridge of Nest, abandoning the corrupted Gram, clambering their way back across the Faces toward Booda, home and safety.

A bishop in a floating cloud skyship encountered them half-way across the faces to apologize for their rash actions, to provide the deep thanks of the Clockwork Queen for the return of her estranged husband, and to offer the party a job delivering a message to 2 Tinkers whom they might find along their way, and a reward for their return – in whatever condition – of a small fortune: 1000 shin.

The party found the Tinkers, and in as much secrecy as possible warned them off. The Tinkers fled West over the Crack Range.

On the way back to Boodah, the party ran into 2 Sisters of Salt & Steel who were whipping a monk of the Amber Pope in punishment for his unrepentant indiscretion with them.

The group arranged for the safe transport of the trio, their disagreement to be adjudicated by the powers of Boodah.

Returning to Boodah, they found a great smog laying over the city. In the dead grass of the golf course, a belching clacking encampment of Aeon Priests led by “Kronk” had taken up residence.

The Abbot, Kine, of the Caramels, an order of the Amber Papacy, took possession of his monk and promised appropriate penance. No sourer than before, the Sisters of Salt & Steel departed.

The Aeon Priests offered that Boodah had become displaced, a City of Ghosts. A Sister of the Seven was rumored to be inside, one Shen-Na.

Sometimes, Haven is not so succorish.

Please to be using this which I am so excited about to backfeed me! Backfeed Form