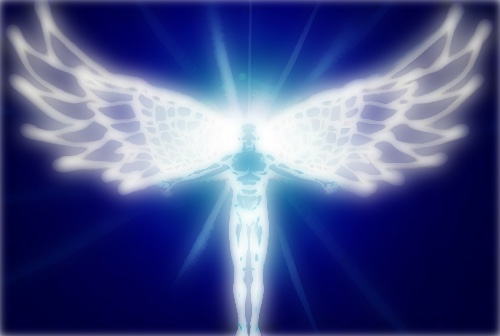 The boat was fine. Roz was fine. The baby was a bit squashed. He looked serious, little Koshi. And miffed, to be fair. Maybe serpent-lady boobs weren’t as comforting as you’d think?

There was flat, unremarkable twilight as far as the eye could see. Maybe there was no more land. Maybe this was a flood of epic proportions or the continent had sunk. What had the Gaians done now?

A star that was in the water but not in the sky attracted Roz’ attention. Slinging up the baby while he glared at her. Then sploosh into the water, body stretching, altered, slithering through her own ripples.

The star? Hasver walking along the bottom of the water, staff beaming. He had been following some instinct toward Roz. They met on an outcropping and compared “what on the 9th World happened?!”

Back at the boat, they spoke and began to putter slowly west, which was the directly they’d mostly been going. In the northern sky, a phenomenon sparked into life: a wheel of figures made seemingly of stars sprang into existence, turning, the figures chasing each other, and tethered together by a darkmatter octopus with indigo star eyes. The effect must be at least in the upper atmosphere, as from far away, it seemed to be part of the stars.

Then a beacon of pointed gold light, like a spear kilometers tall burst into existence ahead of them. Motes of white seemed to be zooming up its internal structure every few minutes.

An hour or so later as the immensity of both celestial dramas ceased to be quite as impressive, the 9th World provided something that was: a massive angel burst into life, it’s trident burning a light bright enough to sear cornea, its massive golden wings anchored perhaps into space itself as they burned a glow to illuminate the surrounding kilometer.

It became clear that the Archangel Gabriel was a ship, and her crew, once ascertaining the Truth of the Revelator folk, warned them about their westward course, that it would take them to the former tributary of the Tithe. The destruction of the Obelisk of the Water God by the Gaians 2 days before had caused an interdiction against water in the entire Tithe (!) and the resulting rapids at the borders of the surrounding lands are treacherous to small craft – for the interdiction does not keep them from being swept  into the now-empty-canyons of the riverbed.

It was suggested that they approach the ruined remains of the White Fort at the Spear of Light ahead, and then go on from there, that other survivors might arrive at the fort – which had been a staging base for the Truth against the Gaians. The Archangel Gabriel vanished and a spark of light that was the sphere of its cabin whisked away in the sudden dark.

The fort was a ruin. The entire front 3/4 of it had been scrubbed off the face of the mountain by a massive explosion of debris-filled water that had come up the tithe. The survivors in the Fort were either gone at the time, or in one of the self-sealing sections inside the mountain itself.

Greeting by an floating, many-handed robot named Eesha (a level 4 Fully Artificial Intelligence), they took food and spoke with the few staff survivors. Thousands of people – including troops – had died in the tidal wave.

The leader of the Fort, Priest Zane, was tending to the wounded and the needy up near the top of the Fort. They … used their influence to get taken to him. He was a squat man in a room that once had been a grand ballroom, with massive stained-glass ceilings lit by the beacon above.

He was a squat, sturdy man with dark eyes. He spoke matter-of-factly about their betrayal, and once he was impressed by the unearthliness as well as capability of Roz and Hasver, he told them confidentially that the fusion power source that powered the Torch would soon fail, and the Fort would have to be abandoned. That would also mean the loss of their last Archangel, the Gabriel, since it was fueled by the Torch.

Hasver offered that he could look at the reactor, but Zane was skeptical – he wasn’t sure they even had the parts or could find the parts necessary to fix the device.

In spite of his own evident exhaustion (yet still vibrating with intensity and energy), he urged them to rest, that the robot would take them to quarters and that since the manufactory storage for their uniforms had been in the barricaded section – that perhaps they could get more appropriate garb for members of the Truth.