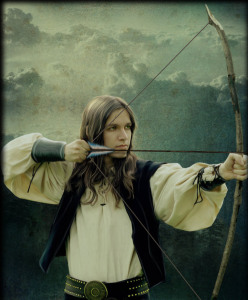 Bel as an Archer

Bel is a god of many names. All of them eventually mean something like “Fair Slayer”. He is said to be tall and strong and beautiful to behold, but that always there is murder behind his eyes. He’s been known to walk, laughing into battle, getting so drunk on blood and slaughter that he loses any distinction of sides, of friend and foe. When his blood lust or rage is upon him, he is as terrifying as he normally is beautiful.

Bel’s favored color is white because it shows peaceful action, and most boldly displays blood stains. He is always said to wear a traditional leather belt, studded with Godsblood (a particular natural impurity of gold that has a reddish- or bluish- tinge), and is said to always pick the favored weapon of his enemy to wield.

Bel on the hunt

Bel is said to be able to appear with any visage he chooses, and will often pick alien skin and hair colors to draw attention to himself and frighten foes.

Those who serve Bel well and nobly are said to get to feast and fight and fuck in his halls on the high mountains of the far north in the Unchanging Lands forever.