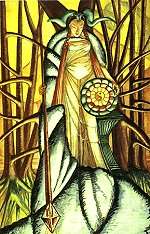 They found a Stevedore named Ruarídgh Hostler to take the barrel full of Cwyn for early delivery to the Sky House.

The day yawned and passed.

Mab lingered at the Goat’s Head public house, and tried not to drink too much.

The feast roared and laughed outside, wheeling like a flock of over- and under-dressed birds inflicted with some kind of spasmodic disease.

Eventually, it was time to go.

He made his way from the Grey Canal toward the Serpentine. On Broad Avenue, long now after midnight, a parade was in progress. A cart went by pulled by horses dressed as unicorns. Dancing on top to the drummers clad as strange beasts were a group of men and women dressed like the lover twin gods Druys and Ventain. Across the street, on the other side of the parade, there was a woman whose copper hair caught fire in the torchlight. In the dark underneath her hood, bronze eyes glowed in his direction. As the dancers flexed and stretched, they locked their gazes, and her beauty moved him. Startled by a man in a dark cloak running across their path, the unicorns started… and with a thunderous crash, the cart toppled the semi-clad dancers and beasts into the crowd… An orgy began, and when he pulled his eyes away from it… she was gone.

Cwyn woke in a stone, barrel-shaped room. There was a table with strange objects on it that were difficult for him to make out. There were 2 doors – a dark oak door to the left under which firelight flickered. A white door to the right under which a clear, steady white light came. A voice like a patient instructor announced that the seeker should choose his experience. The ring shifting his perceptions to the slowness of time and the dangerous implications of the doors kept him in the room. Finally, he chose one of the objects which was a heavy rock jar. He struggled to open it and fell into memories of the rocky seaside of his childhood, the density and support of the earth, and the burning eye of the Dragon peering up through it, recognizing him.

Beside the oat mill, on the banks of the Serpentine, Mab came upon a strange bout of bareknuckle boxing. A massive brass cog had been removed from the mill and laid down under the white banner of the god Bel. A heavy, florid milkmaid was fighting a small, lanky rogue of a man. Her ham fists were the size of his head. He landed small, fast blows and dodged her larger movements. The copper woman was lit by fire now, and her costume brass breastplate gleamed like the real thing. The locked eyes. Spurred by unseen ardor, the woman gave up boxing, grabbed the man in one of her enormous arms and squeezed. He flailed, he went red, he struggled, then slumped toward unconsciousness. She flung the wildness of her braid behind her, spun him around, and kissed him full on the lips. It revived him, and the crowd went wild. When Mab tore his eyes from the strange couple, the copper lady had gone.

There was a 3rd door on the opposite wall, just a doorwalk chalked onto the wall, not a door at all. Cwyn chose a tall, slender, pyramidal ceramic vase, and struggled to get the lid off, finally he staggered back with a burst of air, the tip in his hand. Inside the vase, there was blue and green and an incessant flapping. The blue went on and on forevever, and the craggy green at its center was soft and precious and glorious. it hit him suddenly: it was Mawr. It was growing slowly amid the noise of a constant thunder. He felt free and light. Beneath him the forest-sheltered High Kingdom grew. The dark line of the Abhainn Ion, the great Center River pointed at the grey circle of the Capitol. He saw clearly the ring of mounds that defined the See of Bones. The High Seat was ringed in light. He fell, and the point of the pyramid fell with him. He struck the dome of the See and everything he was broke apart.

Mab made it to the House of the Sky. It brooded, encircled in fire. Figures in motley on its steps began a strange dance, and the drunken folk drew back. The dancers cried out, and moved in writhing patterns of rising intensity. Finally, one of them took up a torch and touched it ceremonially to the hem of his ragged clothes. They must have been soaked with white gas, as he himself became a torch. Mab moved on. Behind the Sky House, he found boxes and barrels to hide amongst, and discovered the copper lady there, much to his surprise and delight. He recognized her – she was the server at the Goat’s Head tavern where he and Cwyn were lodged. And she evidently wore paling makeup and concealed her hair. he also realized that her spear and armor were not for show. Their kiss was their introduction.

For some time, he sat on what must have been the enlarged bung plug of his barrel. His body was somewhere else among buckwheat. Wasn’t it? The voice had insisted, “It is permitted at this time to rest,” and he did. Eventually, he rose again. The light beyond the white door had become slightly frantic. There was a tall, square container vibrating on the table. He longed for the doors. He opened the container. It was solid. As solid and heavy as stone. As the stone foundations of the Sky House, the long sides of fitted stone built with the cunning of the Five Kings before they won and lost their war against the P’ntri. The height of it pointed toward the heavens… and then he saw it, the huge towers looming on the far horizons, their shadows drawing across the land, converging… on this tower. And a shadowy figure was walking toward the Skye House, crossing the city like a wraith. There was a light burning inside, as the Underspeaker of the temple used a candle douser to draw a ward of light inside the fane, around the false Sigil of the Siar na Siarai. The figure was at the door. It raised a hand and knocked. And it was not the stone or the massive oak doors that stopped it, but the fragile light. And the bell in the cupola rang once, loud enough to eject stone powder from the cracks of the building. Loud enough that it cracked all down one side. Loud enough that every other bell in Ionad, the great City of Mawr rang in sympathy.

There were women in robes with knives in a Ternyn long boat in the dark water of the Abainn Ion in the Serpentine. There were a company of men in the Sky House garden, dressed as Ddurn, the god of death, chanting and swinging Thuribles. There was a group of strangers around a bend in the serpentine, all pretending to drink and not be looking in this direction. The copper lady introduced herself as Ír (and another, unpronounceable name that sounded a bit like Ír ). They met the women leaping from the boat, their long, curved knives loose, Ternyn imprecations on their lips. Ír threw knives with a buttery grace that made the killing lovely. The women danced and slashed, but Mab’s blade came down with a weight of finality, with all the stored-up loss and rage inside him. They lay dead together.

Back in the stone room, Cwyn understood that the white door led into a grey world where the light inside the Sky House was shattering. The dark door led to his friend, and the theft of the false Sigil. He ran for Mab. The Underspeaker stood drunkenly among the passed-out in the church, holding a candle-quencher like it was a flaming sword. Cwyn shut his senses to what was happening, and stole the sigil from the altar, running outside.

Mab and Ír were crossing the courtyard, blood running from her side and Mab’s sword. The Ddurn impersonators stepped out from among the beans and the sweet rosemary and raised their thuribles and their chanting. The smoke joined together and became something real. It became the tail of the Serpent, and it struck for Mab’s undefended heart. Ír released her last daggers into the air, but they were too slow. Cwyn raced forward, cards blazing in his hands. There was great clash, and then a golden glow burned from Mab’s flesh, and swirling light caught the Serpent’s Tail like the fiery fangs of the Dragon and both burst apart into light and thunder.

“Run!” Ír exclaimed as the interlopers from the other bend of the Serpentine began to rush forward.

And run they did, and when Mab looked back, the copper lady was not to be seen behind the dark bulk of the Sky House.

They ran through the dark city, and kept running. They emerged into the country and kept walking. They got to the edge of the Rowanoak forest, and made an abrupt camp.

Meraig, in a sun-yellow cloak, found them, laying at their feet a basket full of food.

Cwyn launched into his pre-prepared explanation on the letter of their agreement, trying to pull Meraig into the false logic of accepting a lie. Meraig dumped the false sigil into the flames. He told them to reconsider. Mab’s silence rose to a thundering pitch. Cwyn refused, even when Meraig told him he wanted the sigil to keep it from Ilir, to let the High King die, and his wiser daughter to take the throne.

Meraig rose from his strange kneeling posture, and smiled a gellid smile. “I have invited you to a banquet for kings, but you squabble under the table for discarded bones. I will leave you in this, but know that by the end of it, you will be screaming my name.”

And he walked off through the forest like the sun lost in the night.