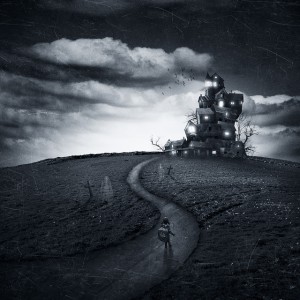 At the edge of the Northern Wilderness, where the Great Plains end and the Dark Trees begin, there is a lone fort, an outpost of civilization. At the heart of the outpost is a tower left by the ancient Elves when they fell back from these lands. It is a beacon (literally) of light in a wilderness, but beacon or no… the darkness has a way of getting in….

Over the last few months, there have been a number of disappearances, as well as several unprovoked attacks by Wolfen from the Wilderness. The tribal markings of the attackers are not a local set, and are unrecognized by the powers that be at the Fort.

Now, a respectable townswoman, Goody Elaine, turned up in the Fort Garden, staked out among the mint, bled to death, marked with arcane symbols that caused the fort Wizard to blanch, and return to his lab in haste. 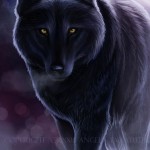 The Mayor sent out riders, seeking the great Witch Hunter of the Eastern Empire, named Gavin, who hunts for wickedness at the fringes of civilization. With his beautiful wife and his faithful hound, they seek out those who would tap the powers of Hell for their own advancement at the peril of their souls and the Empire itself. Many are the dark souls brought to justice by the Witch Hunter. Many are the lives saved by the healing hands of his Elven wife, who forsook the Elves’ separation from the wider world for the Hunter’s great heart and bravery.

Receiving the call, the Hunter and his beautiful wife gathered their things, and their faithful hound and headed north. Of course, no job is ever what it seems. And you never can tell who you are hiring from afar. Dark hearts are everywhere, dark intentions within each man and woman, evil power at hand always. And if anyone would know, it is the Witch Hunter and his wife. And their great, dark hound…..

Awaiting them at the Fort are the faithful and beloved Captain of the Home Guard, and perhaps some…help from their past. 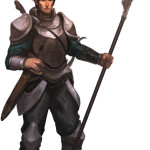 A gruff, ageless 40-something, the Witch Hunter is a no-nonsense protector of Civilization, and enemy of Witches everywhere.

His powerful presence and his faith give him a shield against the darknesses that infect the Empire and rot it from within. His spotless record and the love of his Hound (a supernatural servant sent by the gods? An elven spirit-being willingly serving a champion of good?) and his beautiful wife who left her blessed homelands to travel the world with him, serving their cause.

He is a strong warrior, a wise investigator, if not always successfully social with the folk he is protecting.

When the Witch Hunter’s business took him inside the sanctified bounds of the Elven Protectorate, he was attacked by powerful demons and nearly perished. Dragging himself to the Last House of Light, there she met him and her powers poured forth with a vigor she had never known. Within a day, he had fully recovered from his terrible injuries, and after a long night of secluded prayer together. She abandoned White Star Tower to face the demons and end the danger to the Protectorate by hanging the notorious Witch Belefaz from the highest spire of the tower.

In a ceremony presided over by the old Prelate of the Empire’s Edge, the two married, and have been hunting down witches and demons wherever they dare to tread upon the Empire’s soil.

There is no love like a dog’s love for its master.

Those whom its hard-bitten master loves, it loves. Those who displease the master, well, they are enemy.

Its teeth are sharp. Its claws are strong. Its mind is greater than any mortal hound. It can take the shape of a man, if it chooses, a particular man, a footman for the Witch Hunter. It speaks the languages of the Empire. It sees into the hearts of mortals.

Justice. Service. These are the virtues of the Hound.

Soldier (The Captain of the Guard)

The Captain of the fort was surprised that the Governor took it upon himself to hire the Witch Hunter. Decorated, respected, the Captain had barely begun looking into the disappearances.

Yes, he’s been sick, and forgetting a few things, but he was still on the job, still keen to find out what was awry in the formerly-peaceful Outpost.

Honorable, duty-bound, he will cooperate with the Witch Hunter, providing a local link to the challenges posed by a small, closed community.

Some people, when evil enters their lives, it destroys them. Even when Evil is vanquished, and the soft elven hands of healing are laid upon them, only a shell remains. Some eventually bounce back, and the forgetting comes upon them. Perhaps they shy away from shadows and strangers, but no more than most.

Others, they are catalyzed, like iron under the smith’s hot hammer. Something new comes about in the fiber of their being: something hot and hard and sharp.

Tales of the Witch Hunter are filled with mysterious appearances of his “girlfriend”, his “true love” that he cannot be with until his unloved elven wife betrays him for the last time. She sometimes arrives to smooth things over, to spend part of her legendary fortune on behalf of those unwittingly hurt in the Witch Hunter’s pursuits. Sometimes she appears at the side of a battle, wielding unlikely artifacts or powers. Sometimes she is tall and beautiful, sometimes plain and simple.

For her own reasons, she may have followed the couple to their simple rendezvous in the north.

Perhaps there is something the girlfriend knows that even the vaunted knowledge of the Elves does not about the dangers of the North….